We've been blessed with a wonderfully sunny weekend here at the Little White House. So I decided to go all Bob-the-builder...

You might remember the smelly old fish pond that used to be in the alley going from the back to the side garden. I wanted to have the compost bin there as it's conveniently not too far but not too close from the house. The box was heavy as hell and nearly didn't fit in my tiny European sized car... I nearly wished I had gone for the plastic one. Not! They said it took five minutes to build it. Of course, it took a little while more. 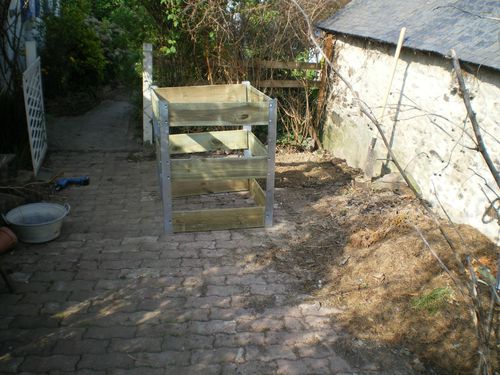 The screw were already in the wood board, but some of them were really askew and made the job difficult... Lucky me, I stole my dad's electric screwdriver, as he didn't know how to use it (I won't translate that, ok?). I had wanted the compost bin to be metal and wood. Maybe because "industrial look" is so fashionable and I don't want it in my home, but it looks fine in the garden! It's better than a plastic one, isn't it? Now, I'm sorry to show you my garbage; but I'm stupidly proud of the first vegetable peels I put in it!!! So, this wasn't the most glamourous post, so I'm going to leave you on a more girly picture! I'm joining some of my favourite parties: please, feel free to crash them to meet wonderful people...


This post made me really laugh. You're so funny and lovely!
And I thought your vegetable peelings were incredibly glamorous!!! Well done for putting it together. I'm not sure I would have been able to - I have the diy patience of a flea!

I had to learn diy patience the hard way: I had nobody to help me with my Ikea furniture when I first settled on my own. Since then I'm a pro at reading understandable badly translated
instructions!!!


I so want to make a compost bin!! Are there any restrictions to things you should put in it? I am happy to be your newest follower. Please stop by my blog for book club if you're
interested--connie, measuredbytheheart.blogspot.com

As far as I know, you shouldn't put any citrus fruit in it... But I'm just a beginner.


Thank you for following me, it's so nice of you. I love welcoming new guests at The Little White House...


Book club? I'm off to check that! I live surrounded by books!